A CLOUD of smoke pouring from a volcano has sent locals into a frenzy – because it looks like a skull.

Residents in Puebla, Mexico, believed the “skull” is a reminder of the imminent “Day of the Dead” festival set to take place at the end of this month. 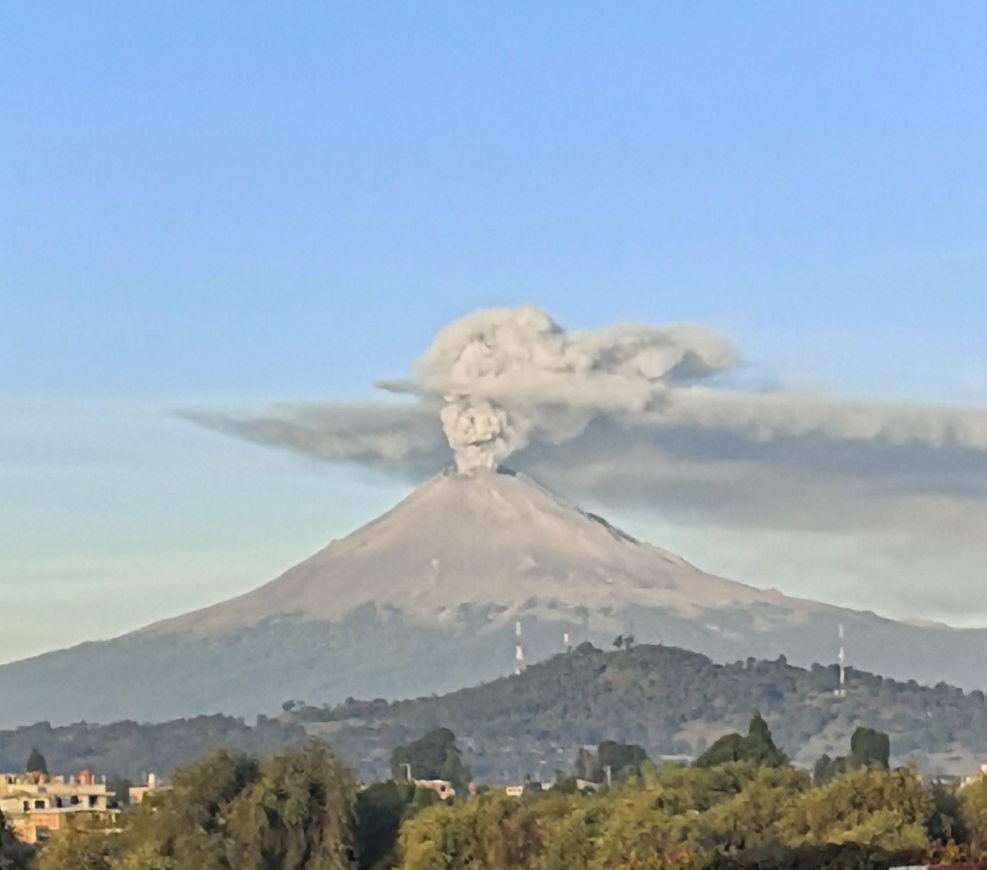 5Residents believe the cloud emanating from the volcano is a reminder of the Day of the Dead festivalCredit: @essmealvarez/Newsflash 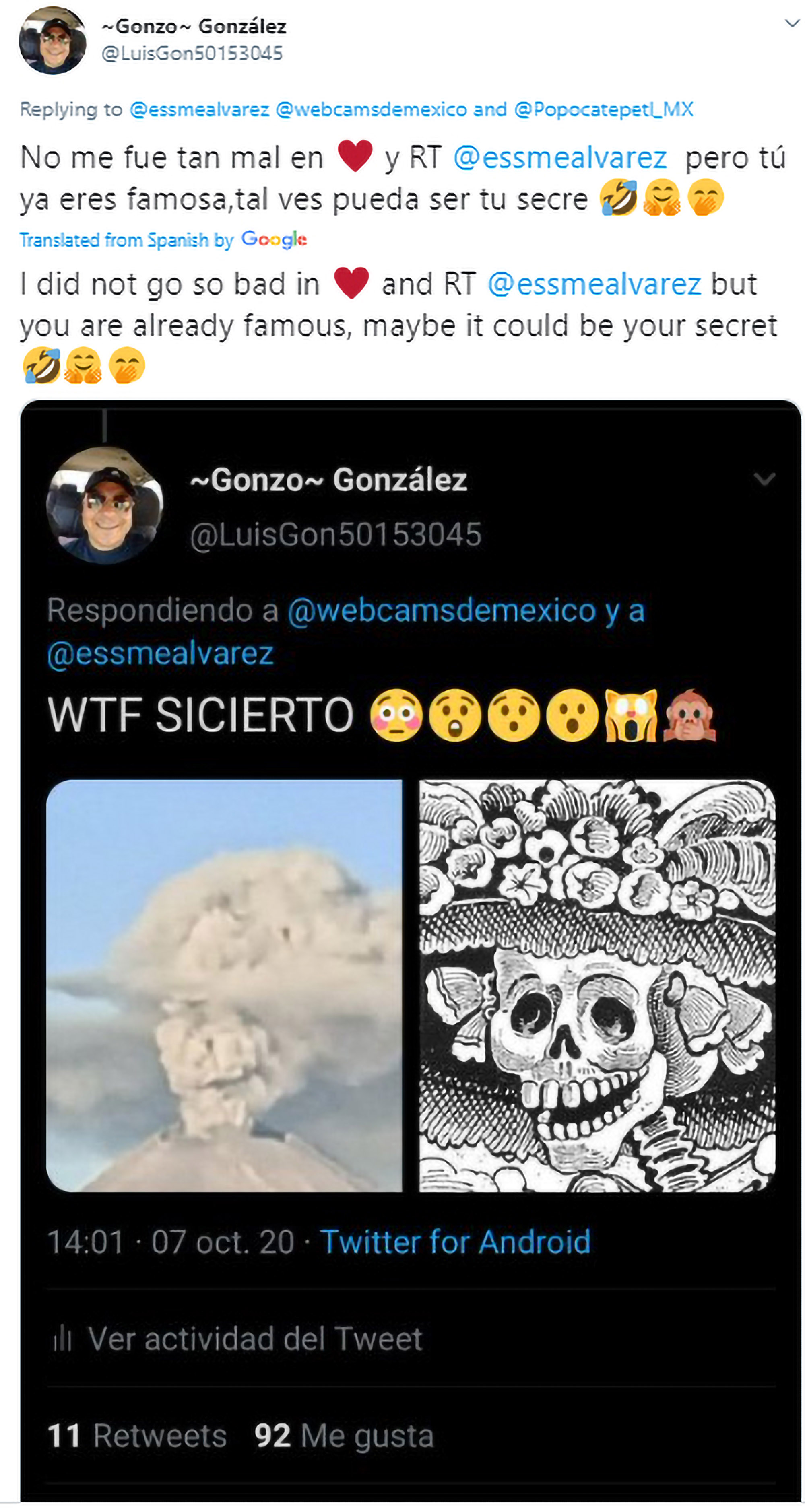 5Locals believe the cloud bears a striking resemblance to the Catrina SkullCredit: Newsflash

The picture was taken of the Popocatepetl volcano yesterday.

The Civil Protection from Puebla warned residents that moderate activity was being recorded by the stratovolcano.

Locals, however were more captivated by the cloud of smoke it produced.

They say the cloud bore a striking resemblance to the La Calavera Catrina (The Catrina Skull), which happens to be the unofficial symbol of the Day of the Dead festival.

The picture shows a huge cloud of smoke on top of the volcano.

During the Day of the Dead, family and friends gather in order to remember and pray for the souls of their deceased loved ones.

Relatives sometimes decorate the graves of the dead as they believe it will help them on their spiritual journey.

People who celebrate the festival believe the spirits of dead children visit their loved ones in November 1, known as All Saints Day while adults make an appearance the following day on All Souls Day.

Jose Guadalupe Posada, a Mexican printmaker and cartoon illustrator created the Catrina Skull as a satirical depiction of Mexicans who tried to adopt the traditions of Europe during the pre-evolution era of the early 20th Century.

Although the event has enormous popularity across the nation, it has had to be cancelled in several regions as a result of the rising number of coronavirus infections.

These include the Xochimilco borough, the San Andres Mixiquic community and vast archaeological complex of Teotihuacan in ye northeast.

Locals have been cautioned to stay clear of the Popocatepetl as a result of a build up of volcanic gas and ash in the zone.

According to the National Centre for Disaster Prevention, 104 exhalations and 483 minutes of tremors have been registered. 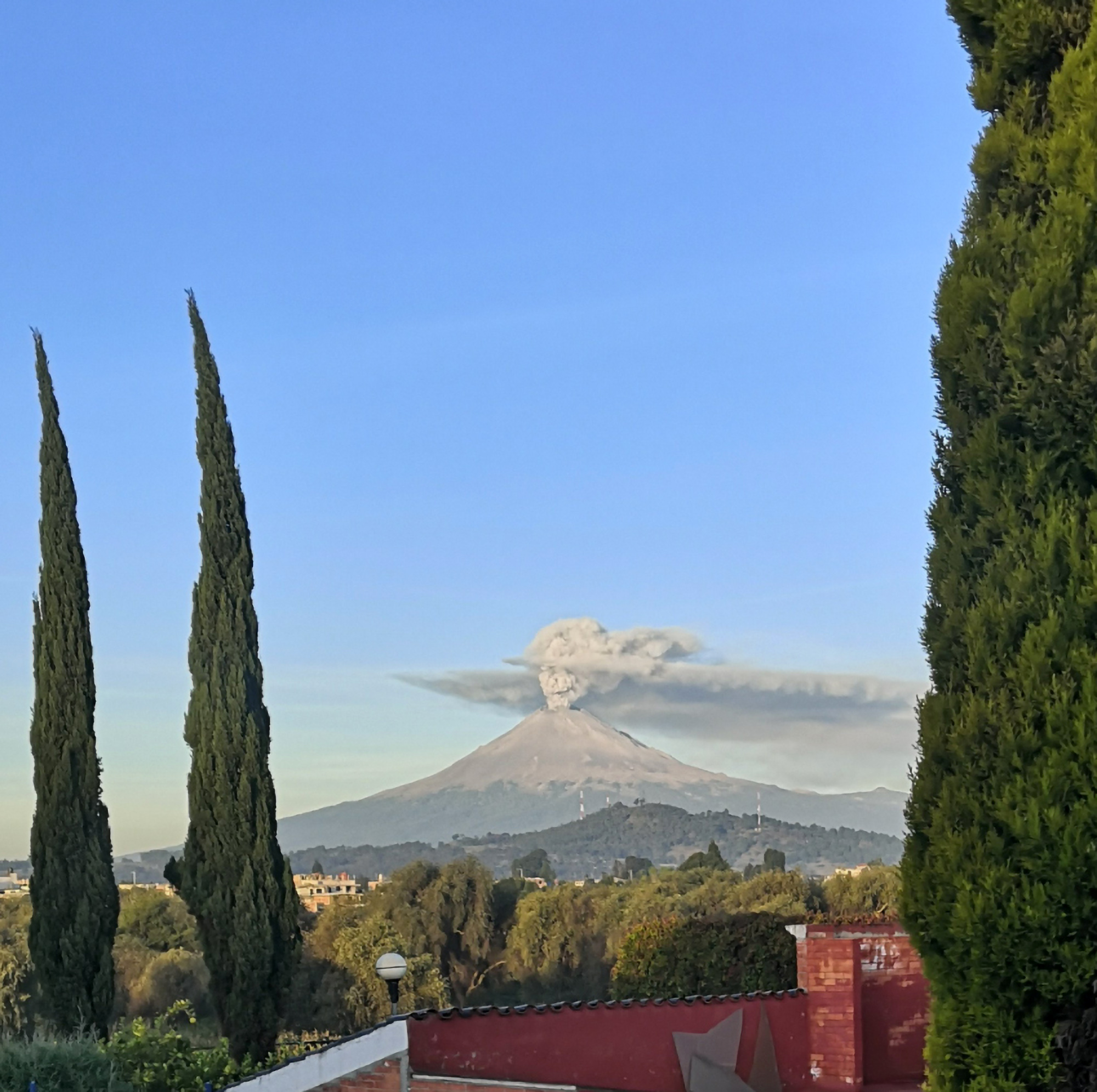 5Residents were marveled at the smoke despite warnings to stay awayCredit: @essmealvarez/Newsflash 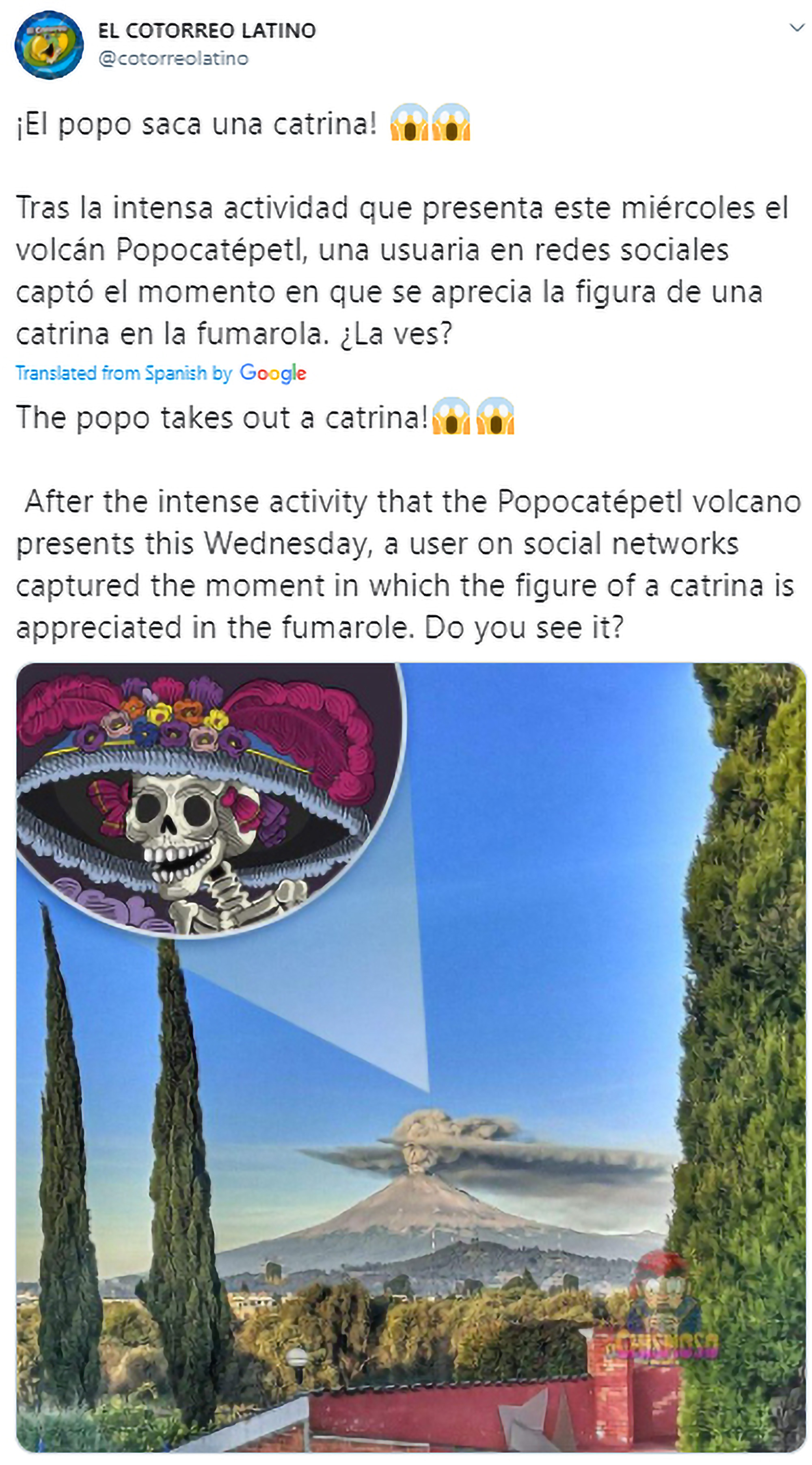 5The picture of the volcano has gone viral on social mediaCredit: Newsflash 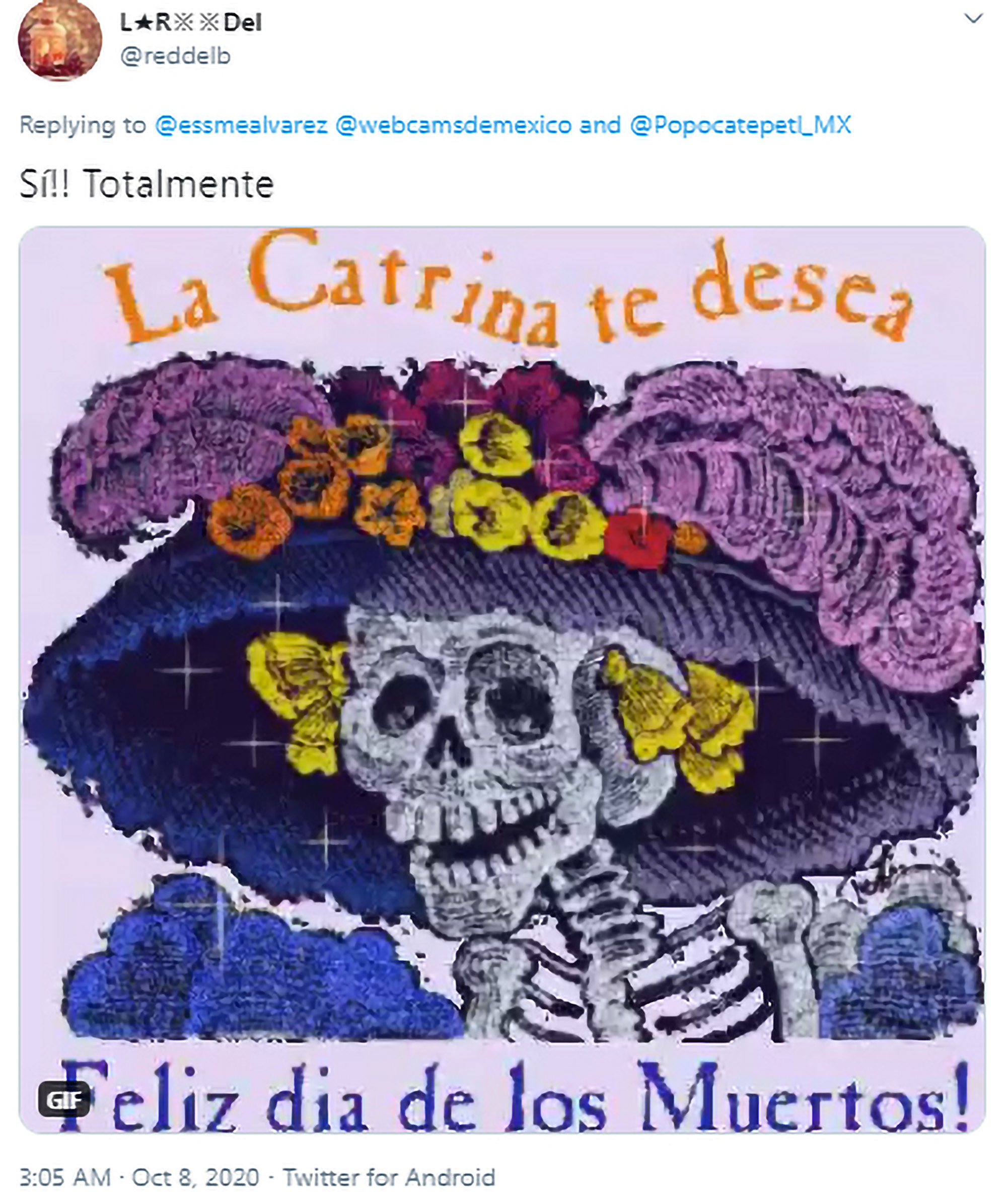 5Several people have tweeted their amazement at the 'resemblance'Credit: Newsflash
'Ice volcanoes' erupt from frigid Lake Michigan in frosty phenomenon